5 Reasons Why You Need to Watch Silicon Valley

The second season of Silicon Valley is finally underway. If you haven’t already seen it, here’s 5 reasons why you need to watch the funniest show about business on television.

If you’re anything like the twenty-something tech wizards in HBO’s Silicon Valley, you’ll know the pitfalls of starting your own company – long after you’ve already fallen; bloodied, broken boned and scorched by the baptismal fire that is forming a startup business.

If you’re not, that’s probably for the best. But that’s not to say there’s nothing to be learned from the collective minds at Pied Piper. In fact we’d go as far as to say it is essential viewing.

So if you haven’t already seen the show, or never even heard of it, here’s 7 reasons why Silicon Valley is essential viewing for every affiliate business owner.

Set in the titular basecamp to some of the world’s most innovative tech companies, Silicon Valley chronicles the rise of Pied Piper, along with it’s bumbling founders, as they get swept up in the modern day gold-rush that is application development and acquisition.

Yes, it’s completely fictional, and occasionally farcical, but it’s still a reverent and insightful look into the business side of how software products are managed and sold. In season one, main character Richard creates a revolutionary compression and, with the funding of quirky venture capitalist Peter Gregory, marketing guru Erlich, business adviser Jared, and alternating COT’s Gilfoyle and Dinesh, decides to take his product to market.

2. A Silicon Chip Off the Old Block

The show was created by Mike Judge, the same comical force behind the likes of Beavis and Butthead, King of the Hill, and the hilarious cult hit Office Space.

Although Silicon Valley feels more in line with the latter, both in terms of concept and characters, it puts its subject under the microscope with the same lens that perfectly skewed the world of meaningless culture and teenage disillusion in Beavis and Butt-head.

Instead it lampoons an industry we’d all secretly love to be apart of, but outwardly poke fun of because we’re not. Take a look at this cathartic ripping at the likes of Apple and Google:

3. How Not to Play Hardball

Getting what you want from other people in business is tough. It demands a careful balance of tact and diplomacy, whilst being able to manage realistic expectations.

Erlich Bachmann (played brilliantly by T.J. Miller) possess none of these qualities when negotiating with investors in season two’s opening episode. Having realised that playing hard-to-get would be the best strategy, insisting no line can possibly be crossed, he dials up the ‘negging’.

In one meeting, he tells the three men sitting opposite that their muffins “smell like shit”, and that one of them is the least attractive person he has ever seen. “And I won’t reveal who it is,’ he says at the end, leaving them baffled.

Across a perfectly put together montage, he goes on to cut scores of other potential investors down to size, placing his testes on one CEO’s mahogany conference table as a show-stooping finale. “I just got a call from them,” he later tells Richard. “There is a line. And I crossed it.”

One import requisite of any business or satirical comedy is a solid team. With the right people in place, magic can happen, and the personalities in Silicon Valley coalesce like the colours of a truly masterful piece of art.

From the geeky bickering between Dinesh and Gilfoyle to the struggles for power between main protagonist Richard and Steve-Jobs-wannabe Erlich, the main ensemble is spot on. And this is only highlighted by the fantastic dialogue, which is peppered with seething insults and funny jabs at the contemporary ‘tech’ culture as a whole. 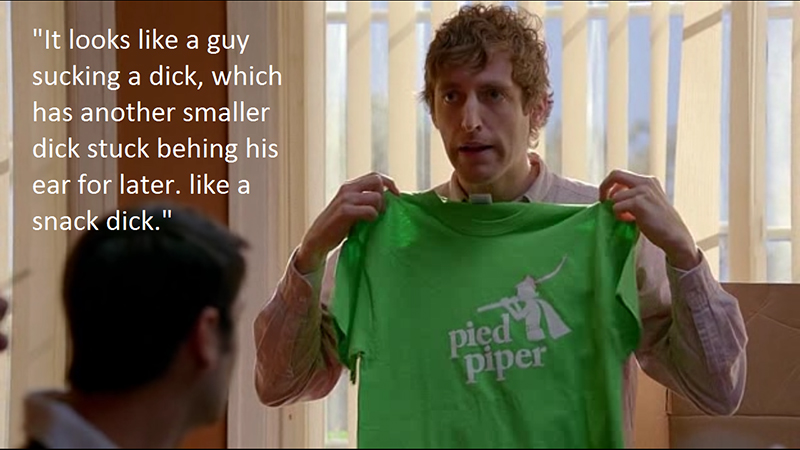 Above: Richard and Dinesh discuss the potential problems with their company logo

Put simply, this show is hilarious, and that’s in no small way down to the fleshed out characters and inspired casting. It leaves other sitcoms of this type dead in the water – we’re looking at you, Big Bang Theory.

5. How to Optimise Your Work ‘Load’

Seriously, has there ever been a funnier scene than ‘Optimal Tip-to-Tip Efficiency’? The answer is a massive no. There honestly hasn’t.

When the team at Pied Piper find themselves compromised at the hands of their opposition, who have announced a superior compression platform during a national competitive event, they decide that the only way they can possibly win is to somehow bride the judges. This is how they plan to ‘pull it off’:

Video is Now an Important Part of Your Affiliate Business. Here’s Why…