There’s any number of ways an affiliate marketer can optimise their ad spend, but it seems as though it’s the ‘little differences’ that really go unnoticed.

From tiny changes yield big results, that’s the message behind today’s Monetise Monday, as Clive explains how you can optimise your ad spend by as much as 110 percent (and we’ve only given him 110 seconds for him to do it in).

For reference, here’s a still of this week’s Monetise Monday whiteboard. 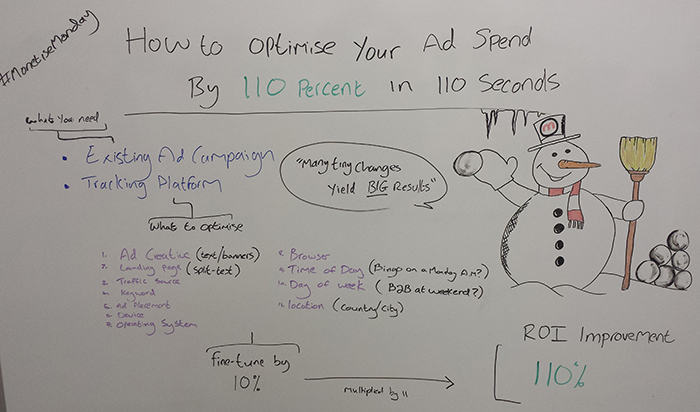 How to Optimise Your Ad Spend By 110 Percent

To begin with, you’re going to need to select an Ad Campaign you want to optimise and of course a reliable tracking platform to oversee conversion data and see what works for you and what doesn’t. That part is imperative.

Like we said, the idea here is to optimise ad spend by 110 percent (and that’s a lot) but we can’t do it all in one go. Nope, we have to look at the smaller elements involved and fine-tune each (just by a margin) in order to produce a cumulative positive impact on ROI.

Think of it as a kind of “snowball effect”, whereby the snowball increases in size the more it rolls down a hill, growing and growing until you have something BIG at the end of it. That’s exactly what we’re doing here; implementing small changes that collectively produce BIG results.

We’ve highlighted eleven commonly overlooked elements which, when individually optimised by as little as 10%, will collectively improve the optimisation of your ad spend by 110 percent:

So how can we optimise each of these elements? Well, let’s begin with the ad materials themselves: Landing pages can be split-tested across a number of variables, from tiny changes to the headline and copy text to completely reformatting the entire layout of your page. Likewise, ad creatives such as display banners can be optimised according to which images/copy performs best.

This ties in nicely with our next element: your chosen keyword. Finding out which keywords yield the best results and cutting your keyword spend elsewhere (as well as optimising your landing pages and ad creatives to align with your best-performing keywords) will eliminate needless cost and help improve conversion rates, if only by a margin.

Remember, all these changes to you ad materials will also involve optimising for device and operating system; ensuring your landing pages are responsive to mobile if that is your best-performing platform, or dropping mobile landing pages altogether if not, reducing your spend and focussing on what works best. The same goes for the type operating system you’re optimising for; if it isn’t working, it isn’t worth pursuing and vice versa.

Finally you’ll want to pay close attention to when your ad campaigns are performing at their best. This will of course vary depending on the nature of your ad campaign, so make sure you drill down into the specifics. B2B campaigns, for example, are less likely to perform during the weekend because most businesses are closed, so you will want optimise for best-performing time of day and day of the week.

The Geo-location of where you’re displaying your ads will also be a contributing factor to the overall spend, with some areas performing better than others, so remember to eliminate any under-performing ones from your campaign.

And there you have it. Remember, it’s all about tiny changes that culminate big, noticeable positive results overall.

We’re on the road again! Next stop: Barcelona…